Survey: A fifth of Finns couldn’t care less about their phone’s brand

A notable number of Finnish people have no loyalty to their phone brand. Nearly one in five pick their phones on other criteria than brand, says our recent nation-wide survey. There is one brand that stands out from the rest in user loyalty. Finnish consumers have a special relationship with their mobiles. A clear majority […]

A notable number of Finnish people have no loyalty to their phone brand. Nearly one in five pick their phones on other criteria than brand, says our recent nation-wide survey. There is one brand that stands out from the rest in user loyalty.

Finnish consumers have a special relationship with their mobiles. A clear majority has at least some degree of loyalty to their preferred brand. On the other hand, almost one-fifth (18.3%) put no weight at all on brand when choosing their next phone. 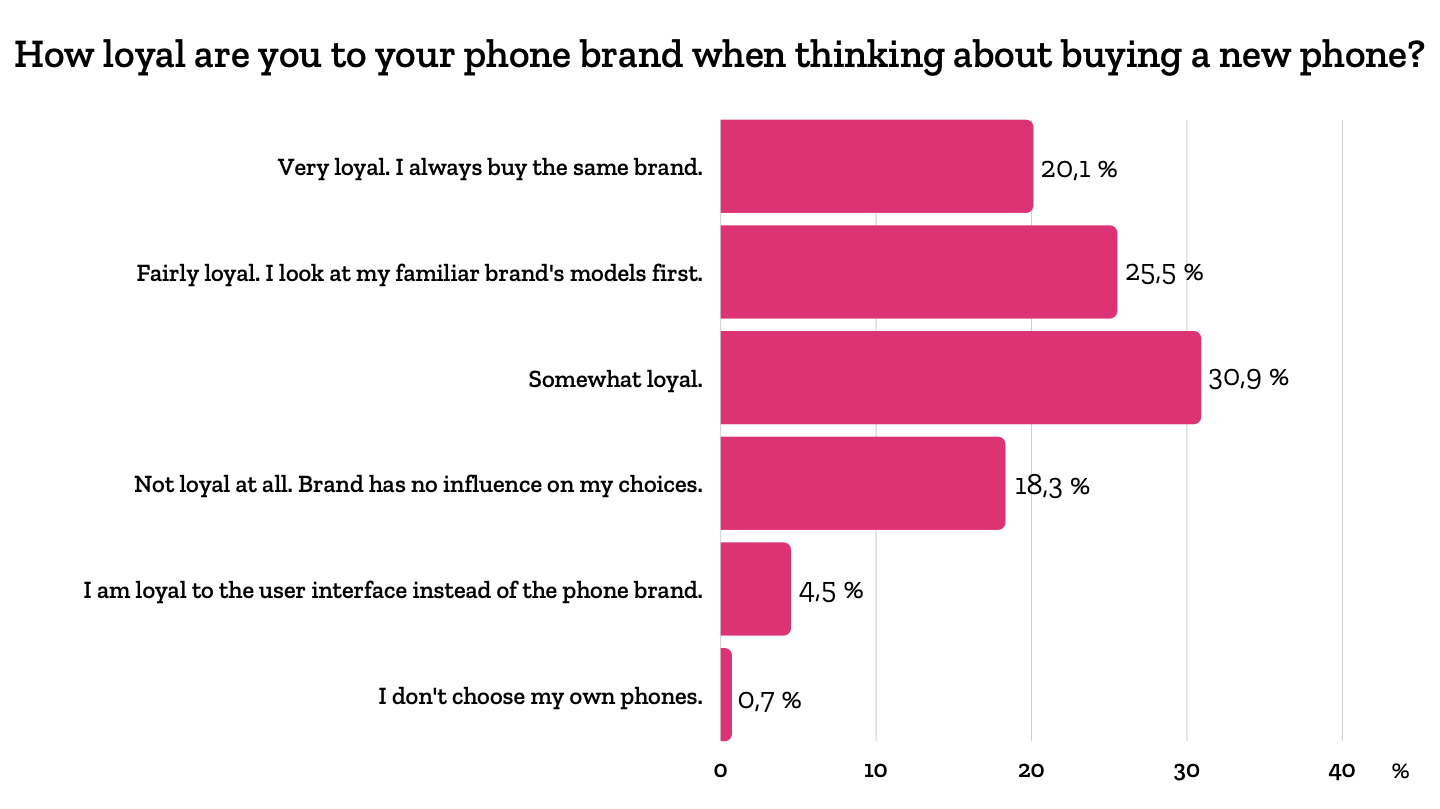 According to a survey we commissioned in late September, brand loyalty is particularly common among iPhone users. The sample was representative of Finland’s adult population.

“According to our survey, iPhone users are highly loyal to their phone brand, with no less than 54 percent always buying the same brand. The loyalty to Apple is especially strong in the younger brackets”, says Qvik’s CEO, Lari Tuominen.

“On the other hand, the answers to our survey show that people appreciate the price-quality ratio of Huawei and Honor, as well as OnePlus and Nokia phones. Nokia still has a group of die-hard loyalists in Finland, partly for historical reasons I’m sure”, Tuominen says.

Nearly four out of ten (39,8%) mobile owners would be prepared to swap brands if the new one offered better features, like more memory, a better screen, longer battery life or a better camera.

“Even though emotions often come to play in the choice of mobile, at the end of the day, the average Finn is a rational and thoughtful consumer. According to our survey, people are quick to jump ship if another brand seems to give better features or more bang for your buck.”

Price-quality ratio and ease of use are key

The survey results prove that Finnish consumers are price-aware when shopping for phones. Nearly 60 percent (59.6%) of respondents said that they would be prepared to consider another manufacturer’s phone if it offered a significantly better price-quality ratio.

More than a fifth (22.8%) could entertain the notion of switching brands for better usability. But Finns don’t care too much about how their phone looks: only less than five percent of respondents would switch on that basis.

Finns stick to their brands

Force of habit is an important factor preventing people from changing phone brands. Almost four out of ten (37.1%) Finns prefer to stick with their brand because they have gotten used to it.

“When a consumer has learned to use a specific brand and UI, they don’t want to let go. Learning to use a different brand and, potentially, user interface is not an attractive proposition. An emotional connection with the user’s current brand is also a significant reason for sticking with it. Almost half of Finns, 48.5 percent to be precise, simply like their current phone brand”, Tuominen says.

Habit and emotions are even greater motivations for iPhone users than others. Exactly half of them (50%) don’t want to switch phone brands because they like what they have. And more yet (52%) say that they have gotten so used to their phones that they no longer want to change. 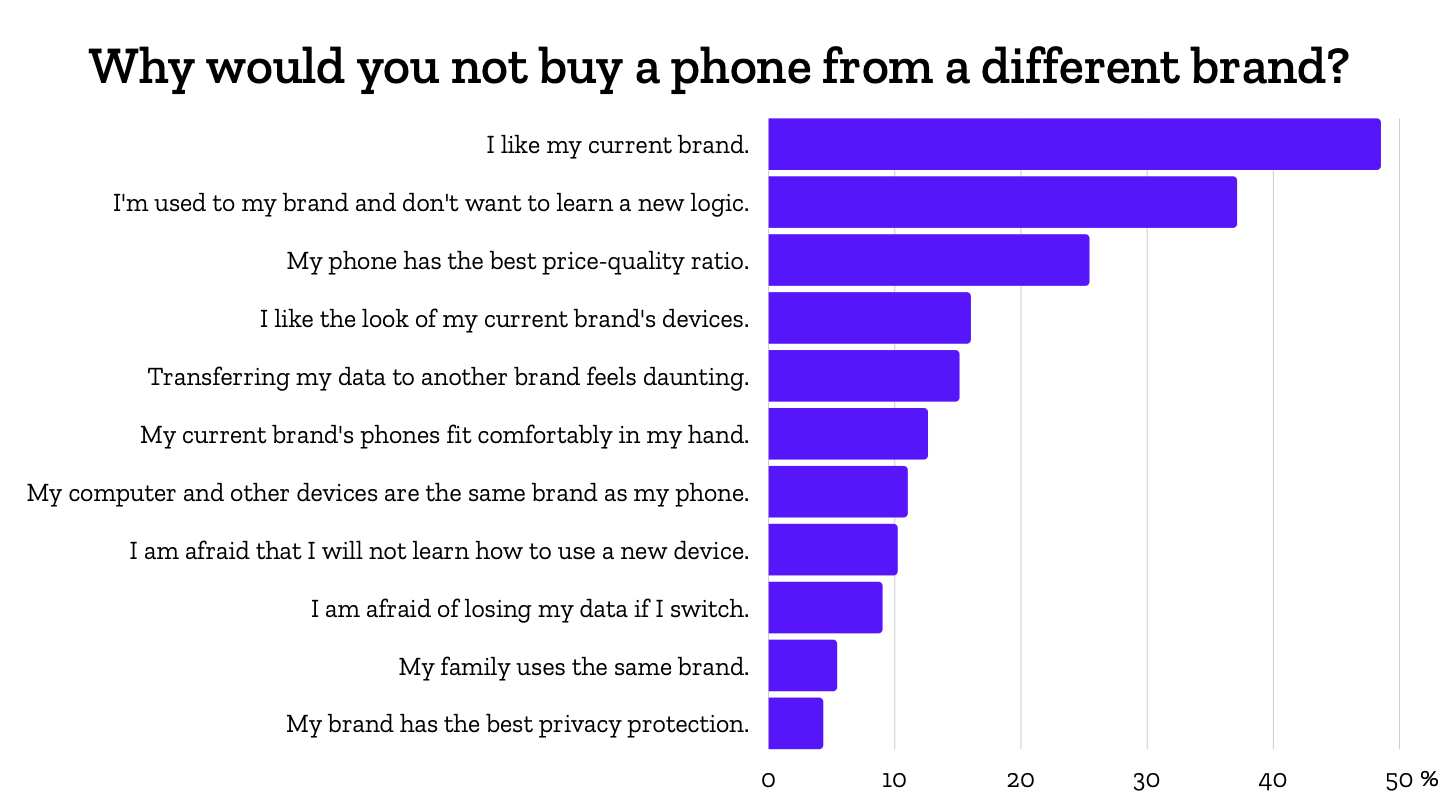 Concerns related to switching devices dampen roughly every tenth Finn’s willingness to try a new phone. Slightly more than one in ten (10,2 %) stick with their familiar brand because they are worried about learning to use a new phone, while nearly as many (9.0%) are afraid of losing their data if they change.

We commissioned this nation-wide survey at the end of September to investigate why Finns choose the phone brands they do. The electronic survey was taken by a thousand people aged 18–75. Half of the respondents were men and half women, and the sample was representative of Finland’s adult population. The margin of error of the electronic survey conducted by research company Bilendi is 3.1 percent.

Survey: The pandemic has turned the Finns into demanding e-customers