The Finns have unfounded suspicions about e-commerce and mobile payments. Our survey investigated why so many customers cancel their online purchases in the payment stage, and why they are worried about paying with their phones or tablets. The sample was representative of Finland’s adult population.

According to the results, one in five (19.7 per cent of respondents) didn’t go through with their purchases because they were uncertain about where their payment information ended up. The most common cause of interrupted payments, however, was a technical error.

“A great user experience is not possible without technically reliable digital services. Our survey revealed major shortcomings in this basic area, as more than 35 percent of respondents said that they had interrupted their purchase because of technical issues”, says Qvik’s Head of Design, Matias Pietilä.

The survey also indicated that close to half (42.6 percent) of consumers are suspicious about the safety of paying with their phones. Such misgivings persist even though mobile payments are at least as safe as other methods, if not more so.

“The safety of mobile payments can be hard to judge, because many of the safeguards operate in the background, out of sight of the users. But it is encouraging that one in three respondents was not worried about security”, Pietilä says. 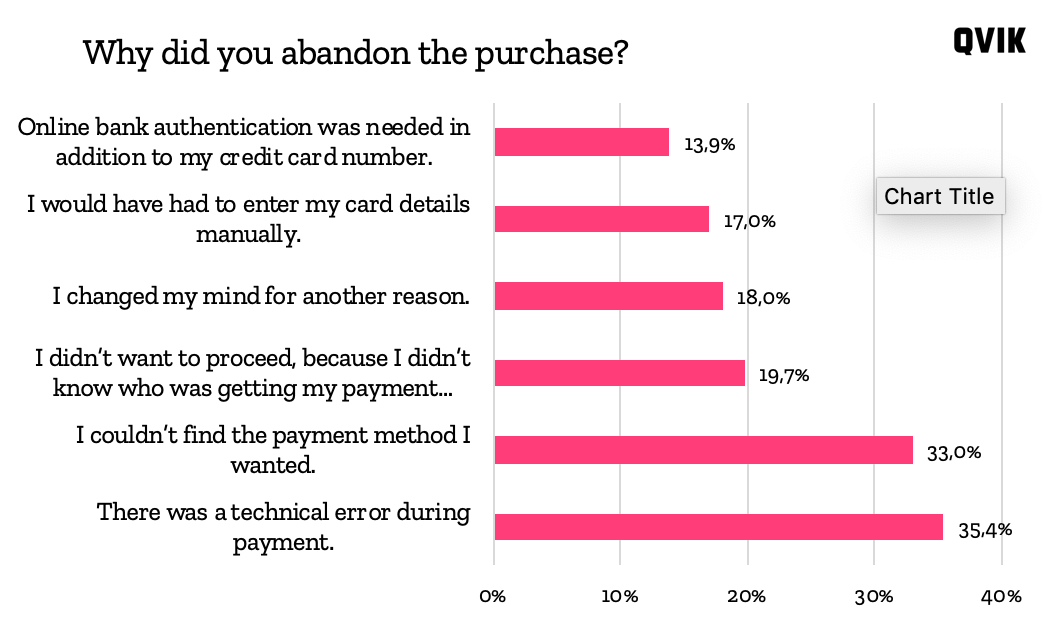 “Apple Pay, Google Pay and MobilePay are particularly safe payment methods compared to conventional card payments, because the vendor never even receives the card number and you don’t need to enter your PIN in public. It could be that people have not realized this yet – or that these same people are leery of other payment methods as well”, says Qvik’s Pietilä.

One in ten abandoned a purchase because of strong authentication

The changes to the EU requirements for the strong authentication of online customers have been a hot topic lately. The new Payment Services Directive PSD2  will require the strong authentication of customers in connection with online payments from the end of next year. Buyers will thus need to authenticate themselves with credentials such as online banking codes, instead of just punching in their credit card details like before.

“The strong authentication of credit card payments has been a rule in Finnish online stores for some time now, so the change will have the biggest impact on mobile applications. Many apps have stored the user’s credit card details, making payment easy. Strong authentication could complicate their payment flow a lot”, Pietilä continues.

A smooth payment experience is extremely important for consumers. Many people will abandon a transaction for the smallest cause, such as inconvenient payment. In Qvik’s survey, 14 percent of those who had abandoned a purchase gave authentication with bank login codes as the reason. Roughly 17 percent said that they had interrupted a payment because they had to enter their card number manually in the online store.

“It looks like the gap between online stores with convenient payment and those without is only widening in the market. On a positive note, new authentication options will become available in 2020. Vendors who adopt the latest authentication technologies will be able to keep offering their customers the smoothest payment experience possible.”

We charted Finnish attitudes to online and mobile payments with a national survey in October 2019. More than 1,000 people aged 18–75 took the electronic survey. Half of the respondents were men and half women, and the sample was representative of Finland’s adult population. The electronic survey was implemented by Bilendi, one of the leading research service companies in the Nordics.