Survey: More than a fifth of Swedes don’t keep track of their digital subscriptions

When it comes to billing, digital subscriptions are a mystery to one in five Swedish consumers, a recent nationwide survey reveals. Many have thought about taking control of their subscription charges but can’t get around to it.

When it comes to billing, digital subscriptions are a mystery to one in five Swedish consumers, a recent nationwide survey reveals. Many have thought about taking control of their subscription charges but can’t get around to it. Over a tenth pay their bills automatically, but never look at their payment histories.

But some Swedes take a prudent approach to their digital service subscriptions. More than a tenth (15%) regularly review their subscriptions and cancel unnecessary services. The majority (62%) feel in control of their bills.

The nationwide survey commissioned by Qvik was taken by one thousand adult consumers from all over Sweden. It dealt with services offering digital products instead of physical ones.

More than a third (33%) of Swedes have subscribed to two or three new digital services over the past year. And no less than 67.1% have used at least one new service within a year.

The Swedes are trying new services at an amazing pace right now. People are quick to drop services, and new services are springing up all the time. In other words, the service market is developing intensely. 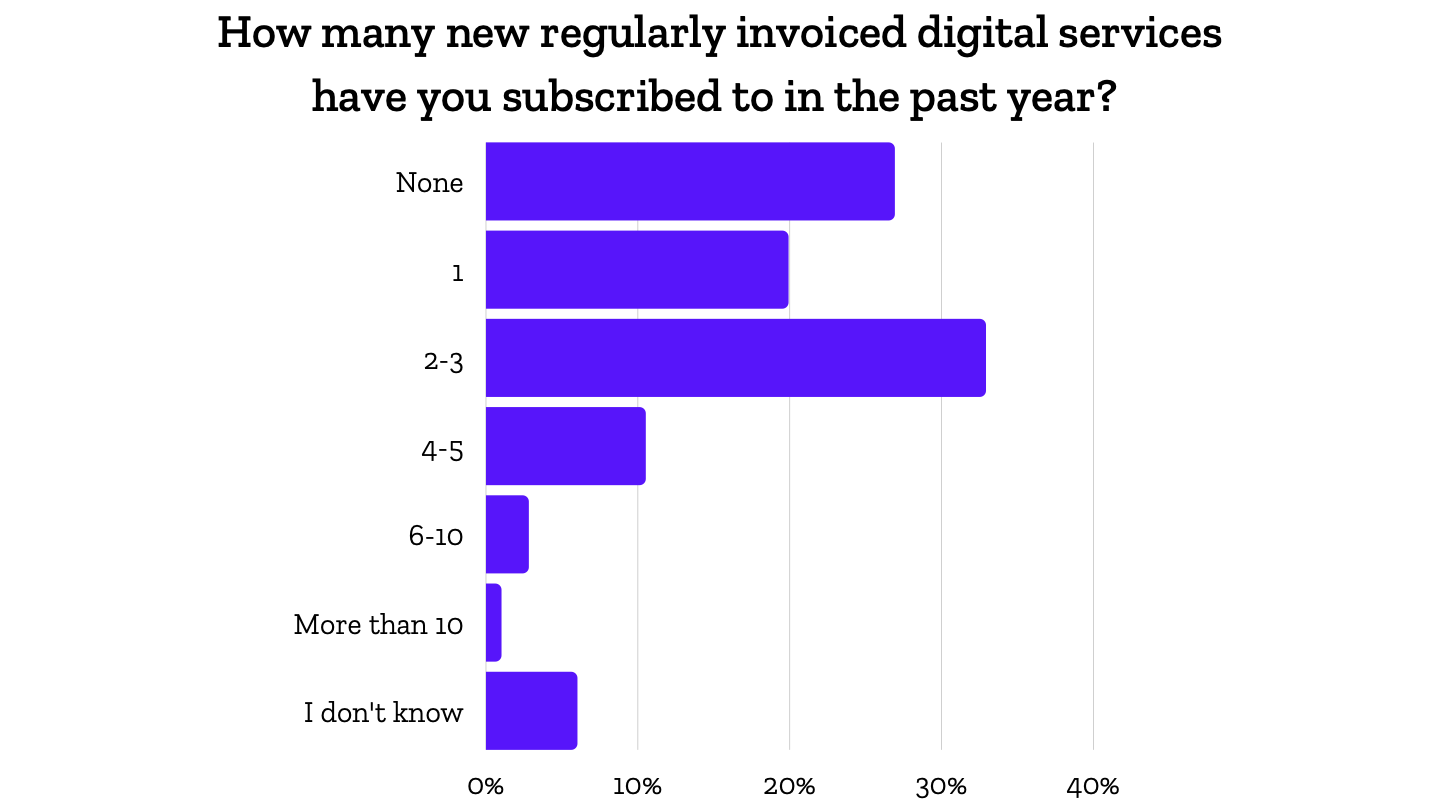 “The growth potential is huge, especially among users who are not active subscribers of digital services.”, says Jesse Vartiainen, CEO of Qvik AB.

Nearly a third (27%) of Swedes have not adopted a single new service in the past year. However, six percent reported that they don’t keep track of their new subscriptions.

Our survey revealed that 15 percent of Swedish consumers don’t have a single regular digital service subscription. One in three (30%) belong to this category in the 60–69 age bracket, for example.

“There is considerable potential and room for development in this category. But not every senior citizen has access to digital service subscriptions. Current solutions may not serve the needs of all consumer groups as well as they could, and improving the attractiveness, availability and accessibility of services should be an urgent priority.”

More than half of Swedes (53.9%) subscribe to one to three digital services with monthly billing. On the other hand, seven percent could not say how many services they subscribe to.

One in five have switched to a cheaper service 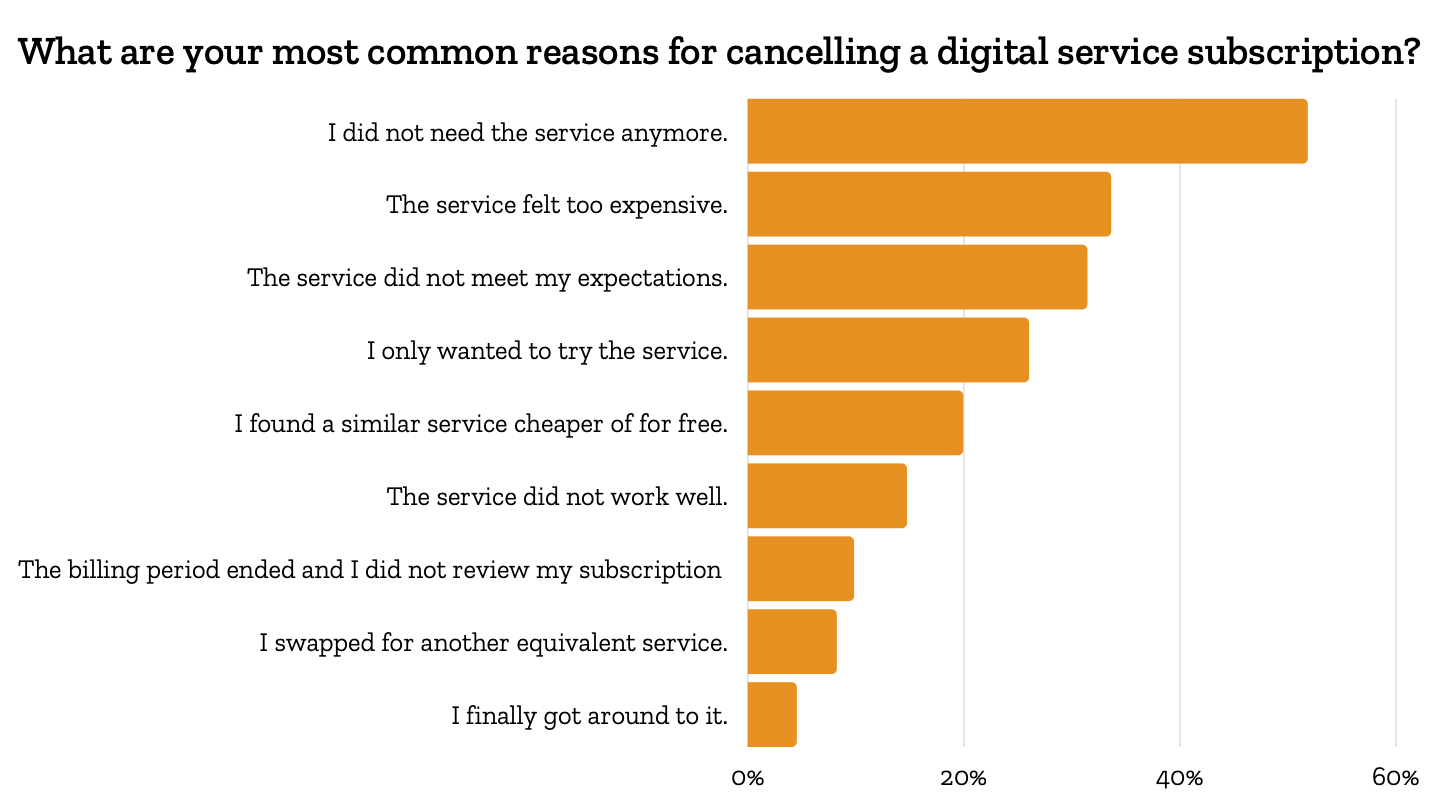 “A surprising number of respondents had been let down by the service they subscribed to. This sends a powerful message to service designers and marketers.”

Swedish consumers are extremely price-conscious, and there are a lot of service providers on the market.

Audiobooks can’t compete with movies, series and music in Sweden

The Swedes’ favourite services are video streaming providers like Netflix, HBO and Cmore, used by 63 percent of consumers, and the music services Spotify and Apple Music.

The Swedes are also interested in cloud storage, such as Dropbox, Google One Drive and iCloud, with 39 percent of consumers using these services regularly. But e-books only rank sixth in digital services used by Swedish consumers.

Roughly a third or 31 percent of Swedes regularly subscribe to digital news and journalism. Work- and study-related applications like Adobe, Microsoft Office and audiobooks are used by 27 percent of consumers.

We studied the subscription habits of Swedish consumers with a nationwide survey in December. Our electronic survey was taken by a thousand people aged 18–75 in Sweden. Half of the respondents were men and half women, and the sample was representative of Sweden’s adult population. The margin of error of the electronic survey conducted by research company Bilendi is 3.1 percent.