Survey: Finns are intrigued by mobile payments but sluggish to adopt them

The Finns are interested in paying with their smartphones in-store but inertia, a lack of information and data security concerns are putting spanners in the works, says a recent nationwide survey.

The Finns are interested in paying with their smartphones in-store but inertia, a lack of information and data security concerns are putting spanners in the works, says our recent nationwide survey.

Making in-store payments with your smartphone has been possible for more than three years now. But very few Finns still use the multinational tech giants’ payment methods, Apple Pay or Google Pay, at their local store. 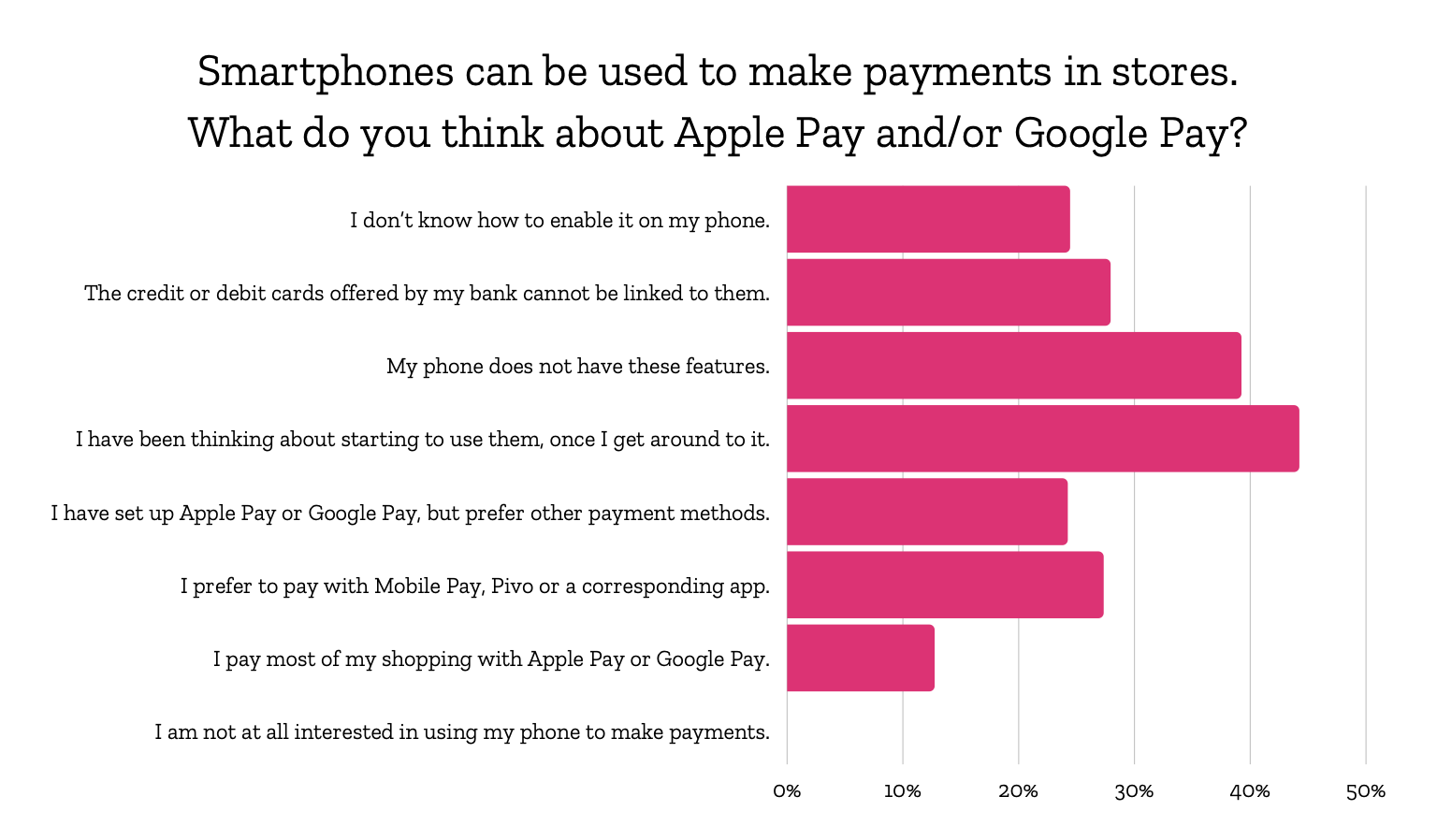 According to a survey we commissioned in late May, roughly a tenth of Finns (12.7 percent) prefer to pay for their brick-and-mortar shopping with Apple Pay or Google Pay. The sample was representative of Finland’s adult population.

Lethargy has set in – are the Finns exhausted by the digital transformation?

Many people are interested in mobile payments, but actually using the new payment method is hindered by lethargy, lack of information and data security concerns.

“More than four in ten respondents, or 44.2 percent, said that they had considered starting to pay with Apple Pay or Google Pay, but hadn’t gotten around to it just yet. In actual fact, starting to use these payment methods is pretty easy, however”, says Qvik’s CEO, Lari Tuominen.

The results could indicate that the digital transition ushered in by the pandemic may have caused momentary exhaustion to set in. After many people have been forced to adopt new technologies quickly due to working from home, they lack the resources to adopt new payment methods.

“The Finns are still interested in mobile payments. Our results show that nearly half of us are intending to adopt the new payment method. What’s more, not a single respondent chose the option: I am not at all interested in using my phone to make payments.”

Nearly one in four respondents (24.2 percent) had adopted Apple Pay or Google Pay, but still preferred other options at the point of sale. One probable explanation for this behavior is that you can’t accumulate loyalty points if you pay with a mobile app. 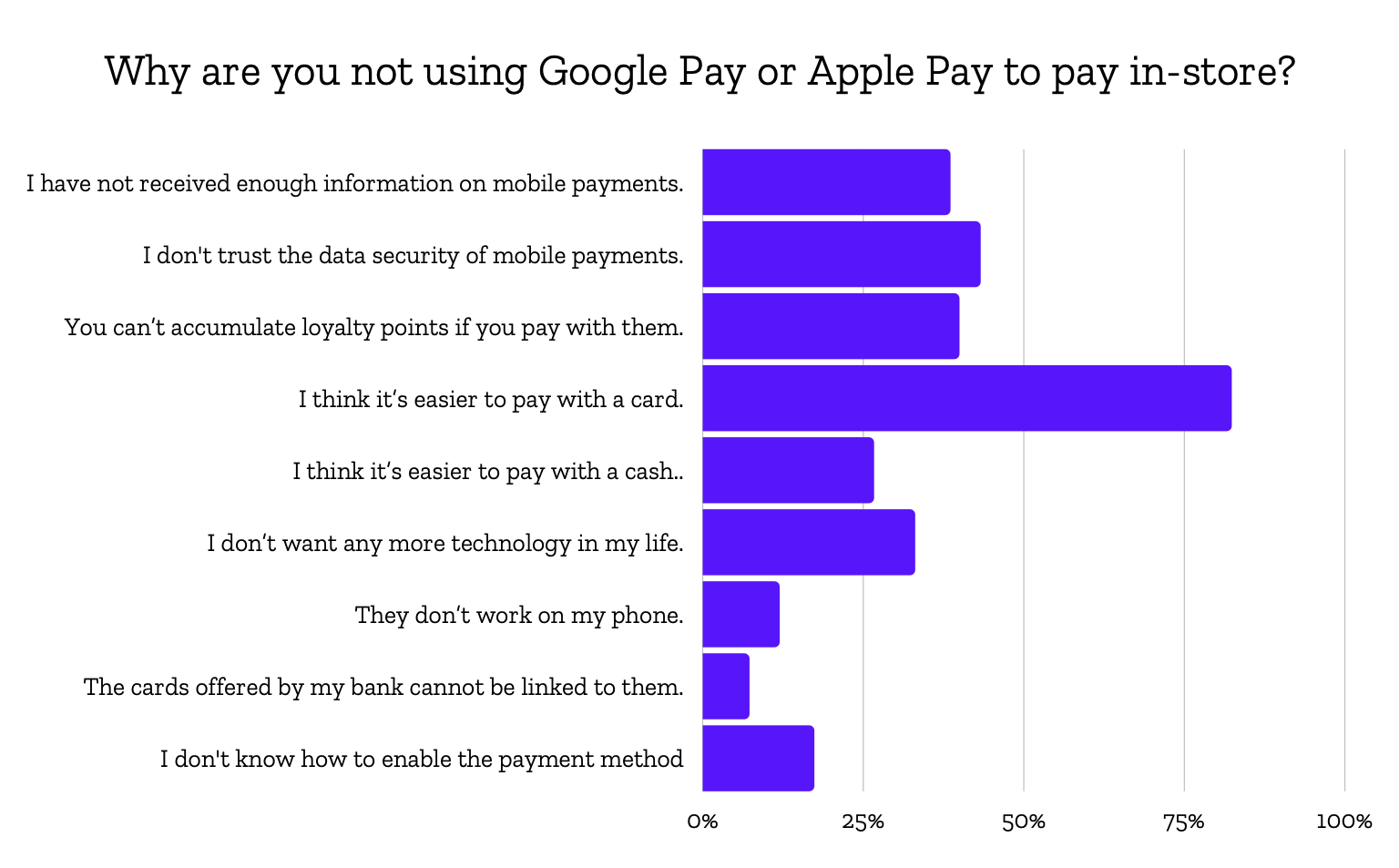 “Finnish consumers love their loyalty schemes, but this enthusiasm appears to be damping the popularity of mobile payments. Four in ten respondents, that is, 39.9 percent don’t use Apple Pay or Google Pay because paying with them doesn’t accrue bonus points. It’s probable that mobile payments will become more popular when retailers extend their loyalty schemes to the mobile channel as well”, Tuominen points out.

Almost one in four respondents (24.4 percent) would be interested in Apple Pay or Google Pay, but don’t know how to enable the payment method on their phones. Furthermore, nearly four out of ten (38.5 percent) feel that they have not received enough information on mobile payments.

More than four in ten Finns are worried about the security of paying with their smartphones.

“No less than 43.2 percent of those who took the survey are not using Google Pay or Apple Pay at the checkout because they don’t trust the data security of mobile payments. Even though Finland has taken a giant digital leap in just one year, it’s done nothing to alleviate data security concerns”, Tuominen says.

“More than four Finns out of ten, 42.6 percent to be precise, also had doubts about the security of mobile payments back then. In reality, it is safer to pay with your mobile at the checkout. Anyone can use a stolen NFC card, but only the owner can access a payment method tucked away in your phone”, Tuominen finishes.

We charted Finnish attitudes toward mobile payments with a national survey at the end of May 2021. The electronic survey was taken by a thousand people aged 18–75. Half of the respondents were men and half women, and the sample was representative of Finland’s adult population. The survey’s margin of error is 3.1 percent. The survey was carried out by Bilendi, one of the leading research service companies in the Nordics.

What are mobile payments?