Survey: Corona has made online shoppers tense – half of customers report being annoyed more easily

The coronavirus pandemic has revolutionized e-commerce: according to our nationwide survey, no less than 81 percent of Finns are now buying products or services online. And more than half of them get irked if the transaction doesn’t go smoothly. The convenience of online shopping is particularly important for self-employed people and the parents of small […]

The coronavirus pandemic has revolutionized e-commerce: according to our nationwide survey, no less than 81 percent of Finns are now buying products or services online. And more than half of them get irked if the transaction doesn’t go smoothly. The convenience of online shopping is particularly important for self-employed people and the parents of small children.

More than eight in ten Finns are buying products or services online according to our recent survey. Over half (55 percent) experience poorly functioning or difficult-to-use online stores as more annoying than before. Nevertheless, over a third (37 percent) of Finns believe that they will continue to shop more online after the COVID-19 emergency.

E-commerce evoked stronger feelings in certain categories of respondents. More than seven out of ten (72 percent) self-employed people admitted being irritated about usability issues in online stores. The smoothness of shopping online is also important to stay-at-home moms and dads, 67 percent of whom said that poorly designed online stores get on their nerves.

Correspondingly, 70 percent of Finns appreciate well-functioning online stores more than they used to. As many as 80 percent of self-employed people and practically every (93 percent) mom and dad reported such sentiments.

“When customers get used to good online services, their standards increase and clumsy online stores must feel even more annoying than before. It could also be that entrepreneurs are comparing the quality of digital services to that of their own. When you invest in providing well-designed services yourself, you have the right to demand quality from other service providers as well”, says Qvik’s CEO Lari Tuominen.

In addition to frustration, online commerce also evokes feelings of solidarity and loyalty in consumers. According to the survey, nearly half of Finns want to support their favorite store, brand or hobby by shopping online. A total of 49 percent of respondents described doing so.

Young people are more enthusiastic about support shopping than their elders. Almost six in ten under-25s (59 percent) reported showing loyalty to their favorites. Fifty-five percent of the 25–34 age bracket reported doing the same. Finnish ownership was not an especially important criterion for online stores, however. Just 15 percent of respondents appreciated domestic online stores.

“The challenging economic situation is directly reflected in the results of our survey. When asked what they value about online stores right now, Finns cited free or affordable deliveries as the single most important factor, valued by nearly half of respondents. The popularity of discounts is another indicator that budgets are tight right now: almost a third of Finns appreciated discounts in the features of online stores”, Tuominen says.

But the results indicate that speedy deliveries are currently even more important than discounts, placing second in the ranking of most important factors in e-commerce. A large selection mattered to slightly more than one in four respondents, while ease of use was important to every fourth respondent. A wide range of payment ranked fifth on the list of features.

“The coronavirus epidemic has lifted e-commerce to an unprecedented role in Finnish everyday life, although business is still not as smooth as it could be. We first charted the Finns’ attitude to online shopping in October 2019. At the time, more than half of respondents had interrupted a purchase at the payment stage in an online store or mobile app. Now, a little more than a third of respondents had abandoned a transaction”, Tuominen says.

In the October survey, the most common reason for interrupting the payment of an online purchase was a technical error. This reason was cited by more than one in three respondents, 35 percent to be precise. The incidence of technical issues has decreased somewhat according to the recent survey. According to the results, slightly more than a quarter, or 27 percent, of respondents had abandoned a purchase because of a technical failure.

“But Finnish online stores are still plagued by a lack of choice in payment methods. Last October, more than a third of respondents reported having abandoned a purchase because they couldn’t find the payment method they wanted in the online store. Nearly as many people still mentioned the same issue in the recent survey”, Tuominen continues. 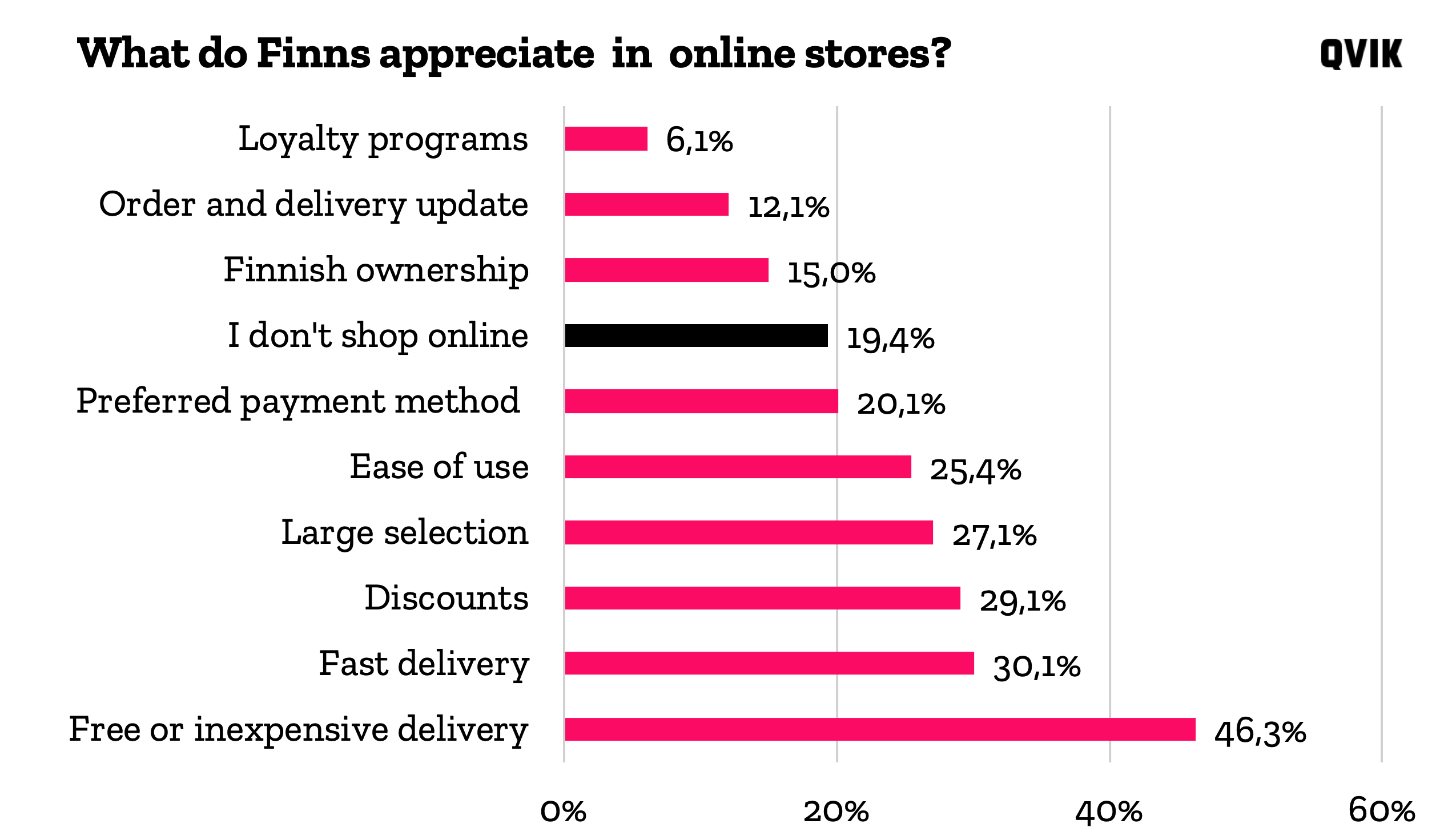 Tech company Qvik charted the Finns’ attitudes to e-commerce with a national survey in mid-April. For purposes of the survey, “e-commerce” was defined as websites and applications that sell products or services.

More than 1000 people aged 18–75 took the electronic survey. Half of the respondents were men and half women, and the sample was representative of Finland’s adult population. The electronic survey’s margin of error is 3.1 percent. The survey was implemented by Bilendi, one of the leading research service companies in the Nordics.