The overall number of insights and thought-provoking stories at NBF Stockholm on January 24 was high. Here’s a collection of one-liner wisdom on the ramifications of what was said in Eric Ries’s and Seth Godin’s speeches.

One of the most poignant notions by Ries was this: the craziest long-term revenue predictions are still looked for and accepted in business, while in your private life chanting such predictions just makes you look, well, crazy. And many do these fantasy plans because that’s how you get your projects funded. Because we’re addicted to the idea of ROI.

“Middle managers are like ninja assassins. They’ll find you and they’ll kill you.” @ericries #NBFSweden

Eric was also asked about the first iPhone and how it wouldn’t have been a very good product if it were an MVP. Ries countered that he thought it was the ultimate MVP. At the time of announcing the first version, Steve Jobs had six iPhones on the table on stage, for hot-swapping. Those were the only iPhones that existed at that point, and they were still catastrophically crashing most of the time. Jobs had one very precise pattern of taps that had to be carried out in order to demo the device. Apple hadn’t figured out how to scale production of the phone – and yet they pre-sold millions of them.

Seth Godin: “Quitting is for winners.”

The skillful reasonings and the rapid-fire delivery of Godin’s talk was perhaps the most inspiring of the day. He was confident that in the face of change, we are not going to be able to manage ourselves out of it. Because management is not leadership. Leadership is finding and solving interesting problems. But, as Seth said, “Taking responsibility is the hard part.” 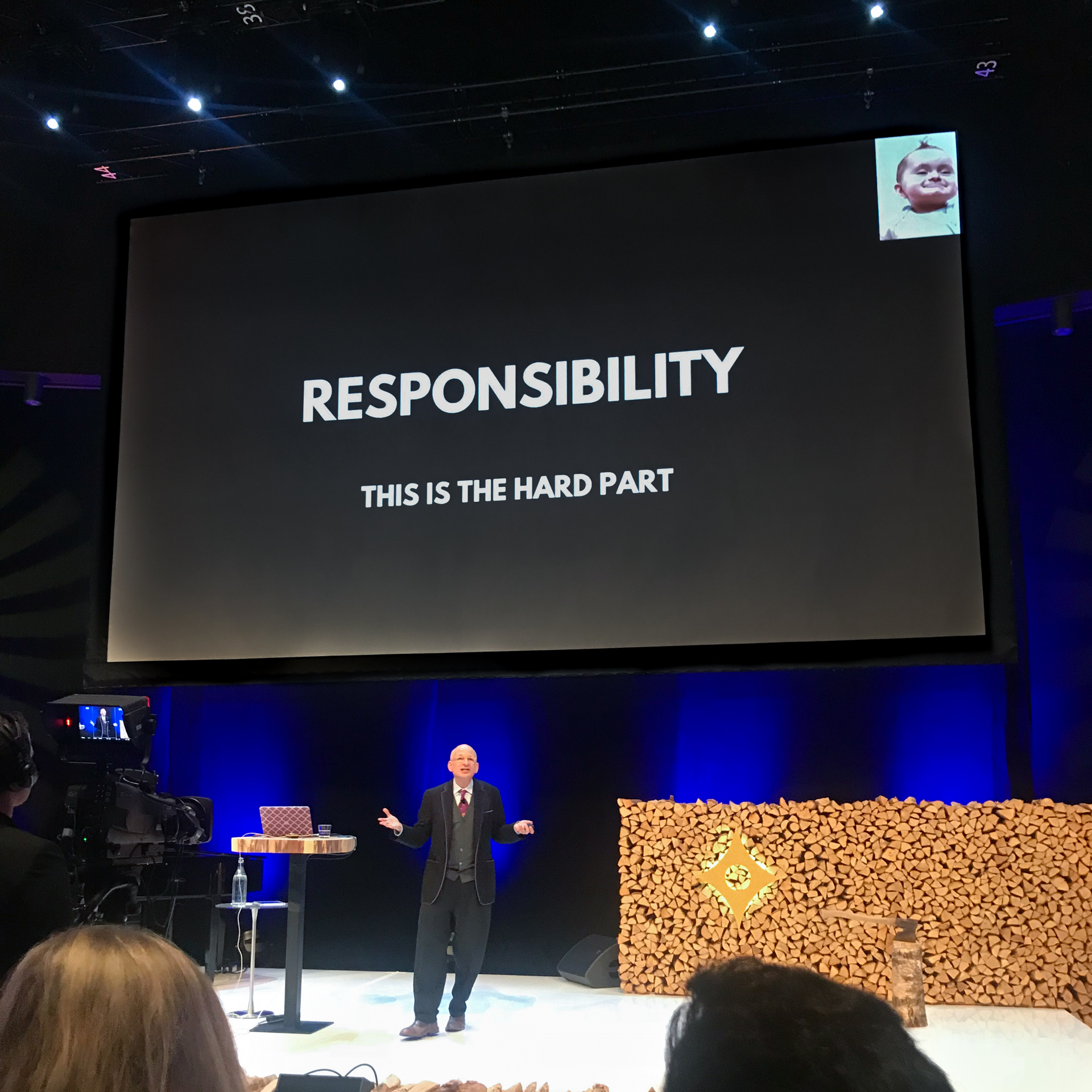 Godin isn’t too fond of excuses, and so he said: “There’s no such thing as leader’s block.” That is of course a reference to writer’s block, where you cannot produce something — mostly because you’re just not doing anything. Leaders just go and lead. Without that they are not leaders.

Not doing anything may sometimes be the result of a fear of making decisions, as we do not know if they will produce good end results. Going forward, Godin said we need to learn to make more good decisions and not get hung up on the end results that may come. Those two are separate from each other even though sometimes we try to reason the other way around: “Because I bought bitcoin two years ago and am now rich it was a good decision” doesn’t hold in Seth’s mind. He thinks it was a stupid decision to buy such a volatile crypto asset, but the end result for this particular person happened to be good.

And what do leaders pursue? Definitely not just quality of work. “Quality means meeting spec. That’s what managers do. Quality is the easy part. Excellence is the hard part.”

That being said, “quitting is for winners.” This is sometimes a hard one to follow in practice as “you should only quit at two times: before you start, or after it’s done.” And not at the dip when things are looking hard.

An excellent day overall, with all the discussion continuing till late evening!