The past few years have seen a number of artificial intelligence technologies swiftly surface from R&D labs into public awareness.  As the present generation of AI solutions is quickly maturing towards commercial use, we may ask what effect it has had on design, if any.

Does AI change what you design?

AI tech is becoming one more piece of technology mandated by product managers, a technology push feature. AI features will be plugged into an existing technology stack, some visible for the user and some invisible behind the user interface. Designers will need to adjust to the new technology choices, but can’t affect them. Changes in interaction design will be a result of new modalities, such as voice interaction, being incorporated into products.

How are design tasks carried out?

The applications of generative design could result in a radical change to practices. Algorithmic or generative design refers to development in which AI tech is utilized to generate “creative” content traditionally considered the domain of human creativity. It can be music, images, text, or user interfaces (see, .e.g. [2-4]).

Generative design refers to a design-specific disruption caused by the development of technology and tools in which the computers create the design by themselves. But that is not the only source of change. Design practices are also being affected by other new multi-purpose digital tools, such as digital photo gallery auto tagging.

Will AI technologies affect why we design and the ultimate motivations of the profession?

Given the polarized treatment of AI in the media, we could ask whether a new wave of ethical awareness is rising among designers wanting to defend users from discriminatory AI and data misuse, or simply trying to save their jobs!

As we have learned from the recent past, the ethical and societal issues generated by new technology are difficult to predict. For example, we are now seeing that the effects of constantly increasing smartphone or social media use and mobile gaming can be similar to substance abuse, causing social, health, and economic issues.This is one result of the nearly continuous advancement of technology.

We should thus expect that the threat of AI should motivate designers to defend humans, and particularly under-privileged users at risk from being mistreated by biased AI algorithms or by any inherently non-user-centric technology. Several books highlighting these issues have been published in the last few years, but how are designers responding? This is a difficult challenge to corporations heavily invested and involved with AI, who can only say that action is needed, but nobody knows exactly what (see a fresh note from Sundar Pichai, CEO of Google)

Impact of AI on Interaction Design Practices in 2020

Right now, the impact of AI on interaction design is minor. There are only a few AI-heavy systems that require the input of designers. AI doesn’t seem to have eliminated UX designers from any particular field.The work of designers remains highly variable. This is partly due to the fact that generative design is still only a vision.

Algorithmic design development has not yet brought a tool into fruition that could replace human designers. There are certain specific and narrow tasks, such as advertising banner design [5, 6], in which generative approaches already provide a competitive advantage for machine or robot journalists reporting on sports [7], but this is largely outside the home turf of interaction designer. It seems probable that the most radical changes will happen only once human-AI collaboration gets up to full speed. 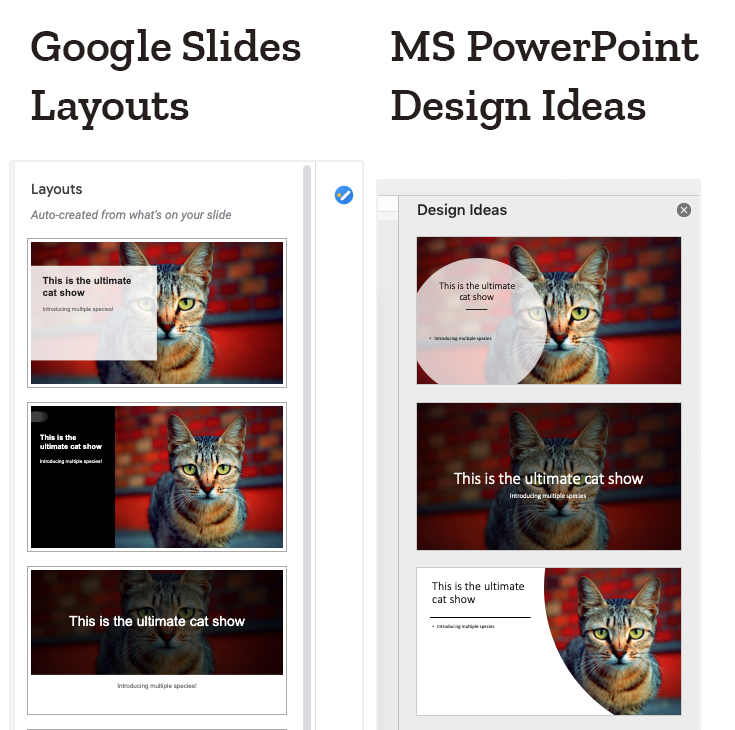 Screenshot of Google Slides and Microsoft PowerPoint in Jan 2020. Google Slides was one of the first commercial services to deploy assistive, generative design functions for users. Their current utility is debatable, and they have been integrated in a subtle way clearly seeking to communicate support, rather than machine domination. Microsoft’s version from 2019 is very similar, and I personally find it more useful.

In cooperative creativity mode, operations that are tedious and slow for a human will be handled by a machine as will, to a degree, design space exploration. This is the most promising development at the moment. It predicts a change in both what and how design practice operates: certain tasks will be taken from the designers’ hands as better algorithmic solutions are found in intelligent tools. But these solutions are mostly yet to be created.

Notable developments in design scaffolding are currently being made with the design systems approach, for instance. When tools relevant to design systems incorporate AI tech, it will naturally affect designers. This development is gradual and results in what could be called intelligent/smart creativity support tools, which don’t design anything by themselves. But they could yet have an impact on what we design.

A public debate on AI ethics is emerging to deal with the questions around AI. The discussion is neither specific nor driven by designers, but since ethics should be integral to design practice, designers should also pay attention and contribute actively to it.

To wrap up these three themes, I would like to make three claims about the impact of AI on interaction design practices:

1. AI technology will primarily be implemented with a technology push.

2. Generative tools do not play a significant role in interaction design practices at the moment and do not threaten the profession.

3. Designers are curious about AI ethics and generative design but, quite correctly, don’t consider them urgent (unlike data use in general).

The fact that the designer profession is mostly being affected by AI tech features integrated into general-purpose software does not mean that designers can just ignore what is going on in the tech world. Quickly developing capabilities are forcing designers to reassess what can and should be left to AI decision-making.

I emphatically encourage designers to take an active role in choosing which AI technologies to implement and utilize!

This post is based on Lassi’s presentation at INTERACT 2019, the 17th IFIP TC.13 International Conference on Human-Computer Interaction.