The battle for the lock screen is on – can you use an app without opening it?

It is no longer enough in 2017 for a news service to have its own application or website from which users can get their news. Fighting for your attention, providers want to bring the news directly to your lock screen as notifications, so that the user does not have to open the app or website at all. The phenomenon is known as the battle for the lock screen, and Yle Uutisvahti wants to be one of the winners.

“Our guiding principle is that Uutisvahti is more of a platform than a place that the user has to specifically visit. We can then build various mini products onto the platform, and they will start living their own lives on the user’s lock screen,” says the Yle Uutisvahti app’s Product Manager, Jarno Koponen. “Such mini brands include Uutisvahti’s Wake-up, Breaking News and Headlines notification types.”

Device manufacturers have a major impact on the formation of new types of phone use. In their most recent updates, both Android and Apple have introduced new notification features that are easy for service providers to use. iPhone’s latest OS versions feature enriched notifications, i.e. the option to use images, video and formatted text in notifications. 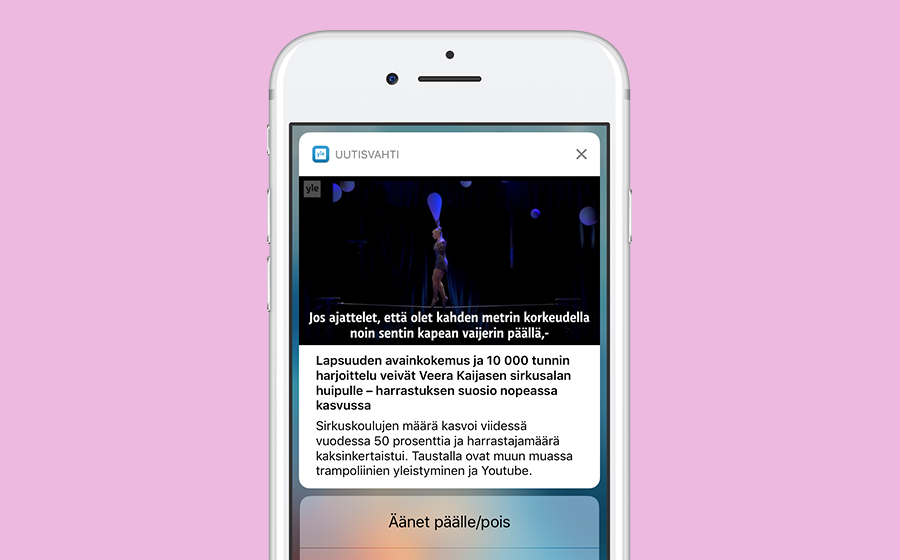 Screen capture of a video notification. Only available in Finnish.

“We approach all development from the perspective of the user experience: how can we serve people better on the locked screen? It’s not a smooth experience if the user has to tap a bunch of buttons and wait for an app to load only to watch a video that could just as well be shown straight from the notification.”

Notifications are somewhat controversial, but the attitude towards news media notifications is generally more positive. According to an international study, roughly one third of smart phone users subscribe to news notifications, but the figures can vary by more than a dozen percentage points depending on the country.

However, people take a more positive attitude if they are able to influence the number, time and contents of notifications. 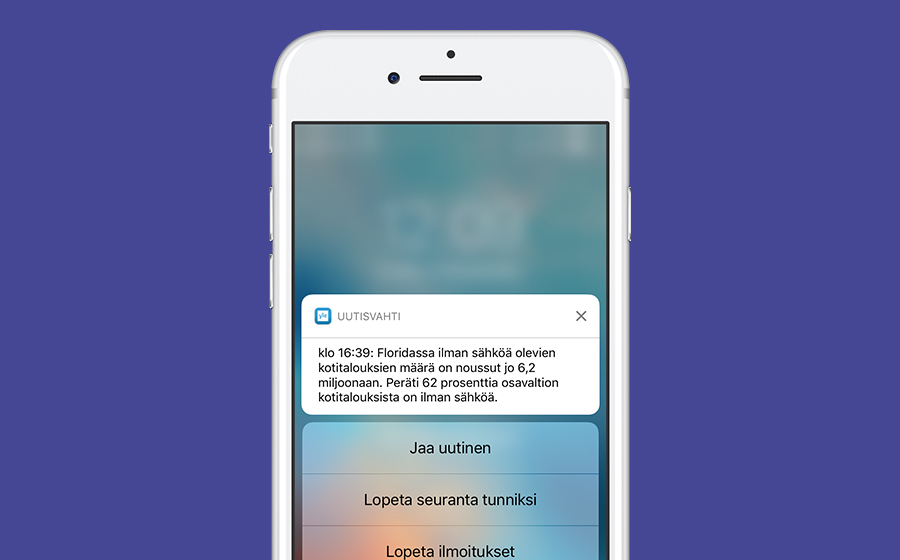 Screen capture of a Minute by minute notification. Only available in Finnish.

With regard to notifications, Uutisvahti has found the answer to what you should offer to users and how often – more than 300,000 users have registered their interests in the app and receive daily notifications on the subjects they want. Indeed, the next question will be where and how to send notifications to users, and how the notifications will affect the user experience and interactions on the lock screen.

“We at Uutisvahti want to create new user experiences instead of just copying others”, Koponen says. “For that to succeed, you have to be prepared to invest in development and pioneering work. You need to experiment and tolerate the occasional error.”

The mobile field is advancing at break-neck speed, and the use of notifications is changing constantly. Koponen believes that, in the near future, notifications will be personalized by an algorithmic filter. You can read his TechCrunch article, AI on your lock screen, here.