Survey: Many Finns are afraid to pay with their mobile phones

According to our recent nationwide survey, one in three Finns would not use their mobile as a payment instrument due to doubts about security. Our survey was taken by 1,000 adult Finns from different parts of the country.

The Finns love their mobiles and are avid online shoppers. But few of us pay for our online purchases with our mobiles since, according to our recent nationwide survey, citizens are concerned about the security of mobile payments. More than one in three Finns would not pay for their online shopping with their mobiles, because they don’t believe it to be safe.

Payment methods based on new types of authentication, such as facial or vascular pattern recognition, are being introduced to Finland at a fast pace. But the truth is that even mobile payments have not yet become mainstream in Finland.

When paying in online stores, the Finns prefer to sit down and open their online banks on their computers. More than six in ten respondents to our survey said that they preferred to pay for their e-shopping through their online banks. Nearly fifty percent would like to use their credit or debit cards to pay for their shopping, more than a quarter would like to pay in installments, and slightly more than one in three prefer payment by invoice.

“The final breakthrough of mobile payment has been expected this year, but these results show that the situation has hardly changed. Properly implemented mobile payments are safer than online banks, so it is quite sad that they are being held back by this false image of insecurity”, says Qvik’s Head of Design Matias Pietilä. “We are a long way from Sweden, where approximately 80% of users, depending on the age bracket, use their Swish mobile wallets on a monthly basis.” 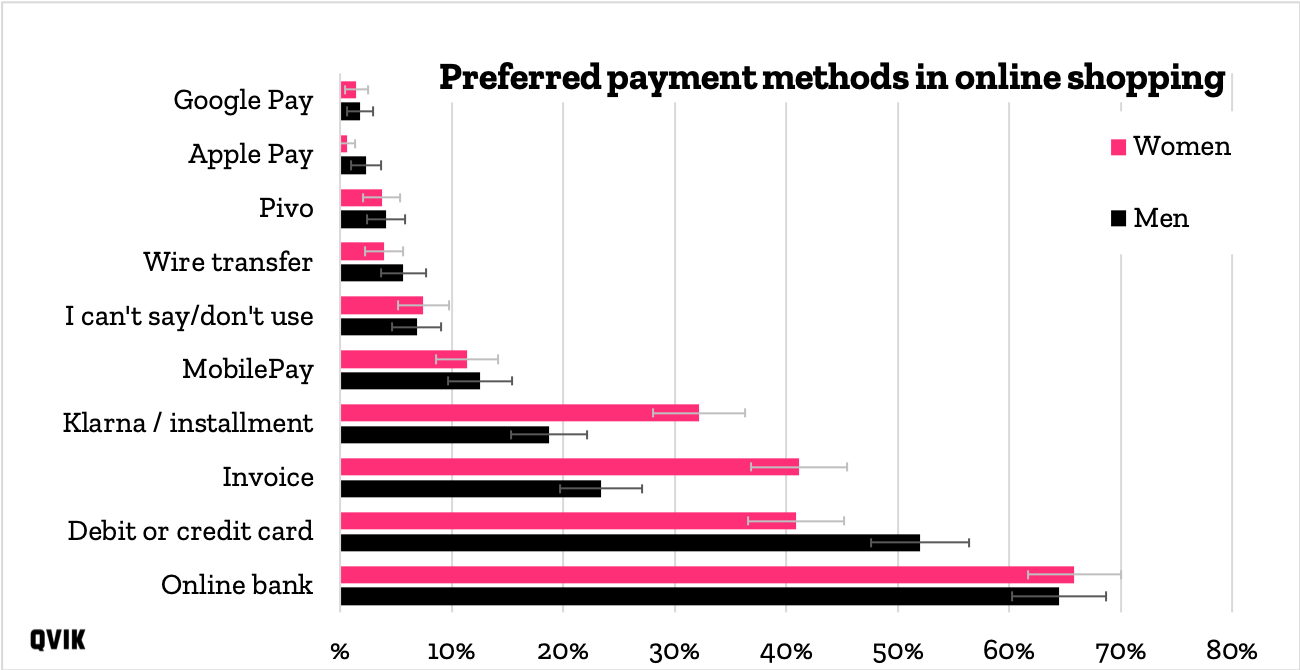 Online banks are still the most popular online payment methods by far, but there are some differences between the sexes. The respondents were requested to name three preferred payment methods, so the total exceeds 100%. The error bars indicate 95% confidence interval.

According to our survey, the most popular mobile payment method in Finland is MobilePay, originally created by Danske Bank. A little over ten percent of Finns named it as their online payment method of choice. The other mobile payment applications, i.e. Osuuspankki’s Pivo, joint banking venture Automatia’s Siirto, Apple Pay and Google Pay achieved the same popularity taken together as MobilePay by itself. Pivo’s back-end operates on Siirto technology and can thus be counted in the overall volume of Siirto.

Even though Finns are a mobile nation, the computer remains the most popular online shopping device. More than 71 percent of Finns browse online stores, and upwards of 76 percent also pay for their shopping on their computers.

Concerns about data security and satisfaction with current solutions were the primary reasons for avoiding mobile payments online. A lack of information was particularly pronounced among women. The error bars indicate 95% confidence interval.

The survey also revealed other differences between male and female online shopping. While more than half of men would like to pay their online purchases with their credit or debit cards, only two in five women would like to do the same.

“Such major differences between the sexes were something of a surprise. They could reflect the more carefree approach to new technology typically taken by men. Merchants with a predominantly female clientèle should probably keep installments in their range of payment options”, says Pietilä.

Computers are easier to use than mobile phones

According to the respondents, the computer is a user-friendly option for paying online. More than half said that computers give a better overall view of the entire online purchase, and the text and payment instructions are easier to read on a computer screen. According to more than a third of the respondents, computers are simply easier to use than mobile phones. More than one in five thought that online payment transactions were designed for computer, not phone screens.

”The large computer screen is very forgiving, as it makes even somewhat poorer solutions feel tolerable. The mobile environment is more demanding. But there are many global examples of mobile payment solutions that function invisibly in the background. These results can also be viewed in a positive light. They indicate that we have plenty of development potential, as long as merchants start taking the mobile channel seriously”, Qvik’s Pietilä concludes.

We charted Finnish online payment habits with a nationwide survey in late April 2019. The original sample was chosen and final sample weighted to be representative of Finland’s adult population. More than 1,000 people aged 18–75 took the electronic survey. Half of the respondents were men and half women. The electronic survey was implemented by Bilendi, one of the leading research service companies in the Nordics.