“There are only two hard things in Computer Science: cache invalidation and naming things.” -Phil Karlton

After years of coffee break talk, it’s finally here: Qvik’s very own podcast, Naming Things. The first episode is now out for you to listen through a variety of podcast services.

As you would have it, the most difficult part about making the podcast was thinking of a name. Many thanks to everyone who contributed over Qvik’s Slack channel!

In the first episode of Naming Things, we discuss Flutter 2’s new features with our software developers. The following episodes will unleash our designers and other experts, not to mention a roster of fascinating guest speakers.

The one in which software developers talk about Flutter’s new features.

Our first episode is hosted by Qvik’s Jari Sandström, who recently evolved from software developer to technical recruiter. Jari bolstered the episode’s lineup with Alex Lindroos—mobile developer at Codemate by day, CS:GO tournament organizer with Kanaliiga by night.

Qvik’s Flutter expertise is represented by Eralp Karaduman—a software developer with a staggering diversity of know-how on everything from Flutter and React Native to pixel art, podcast production and who knows what else!

This is what we’ll be talking about in our first episode of Naming Things. 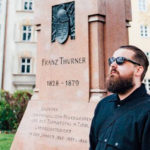