Web Summit. A business conference or the most important tech event?

Web Summit is perhaps the largest tech event in the world with no lack of serious media hype. It is held by a Dublin-based company that’s also responsible for two other big tech events: Collision in Toronto and RISE in Hong Kong. Web Summit was founded in 2009 and was originally held in Dublin, Ireland, but was permanently moved to Lisbon, Portugal in 2016.

The focus of Web Summit is on what the future holds. The event gathers the CEOs and founders of tech companies, startups and influencers around the world to discuss hot topics related to this.

We were lucky to get very cheap tickets through Women in Tech to this “most important tech event in the world”, so going was a no-brainer. Like, how often do you get the chance to listen to talks by the heads of the biggest global companies? Plus, a little bit of sunshine never hurt anybody in November.

Was it worth it?

We had a hunch that the event might be founder- and investor-focused, and it really was. There were many different activities in which startups and investors could meet each other, and most of the talks were sales pitches or sales pitches in disguise. If you have a startup and need international visibility and investments, Web Summit could be a good opportunity to get them.

Still, we expected a few more technical talks from the largest tech event in the world. We didn’t hear any talks about development itself (doesn’t mean there weren’t any), which was a bit surprising, since the organizers obviously expected to have developers there since there was a separate developer lounge. Then again, listening to where technology is heading can also be useful.

The relatively cheap Women in Tech tickets seemed to have worked in bridging the gap in gender diversity, as 46.3% of the visitors were women.

We don’t really understand the hype about Web Summit. It is a conference, an enormous one, and that is how it should be taken in our opinion. We were able to attend all these talks by these interesting people, but most were relatively short (20 min) and only scratched the surface.

If you live in Finland and are not too interested in traveling all the way to Lisbon, you should consider going to Slush instead. It is a very similar event with even some of the same speakers, but with “only” 25,000 participants.

But that doesn’t mean we didn’t get anything out of the event!

Here are our favourite talks from Web Summit 2019

In conversation with Edward Snowden

The most interesting talk was a Q&A session with Edward Snowden, still living in hiding after exposing the US government’s system of mass surveillance. Snowden reiterated his convictions, seen in the documentary Citizenfour, that when entering the service of the CIA he swore: “an oath to support and defend, not the agency, not a secret, not even the president, but the Constitution [of the USA] against all enemies, foreign and domestic”, and a nondisclosure agreement wasn’t going to stop him from doing that.

According to the world-famous whistleblower, GDPR is a good first effort, but the problem isn’t the protection of data, it’s the collection. Instead of asking you to trust them, companies should be showing you why you don’t need to.

“Experiences are what truly make a house a home”, said David Eun, the Chief Innovation Officer of Samsung in his talk about the different phases of technological development. We’re now entering an era where our devices are going beyond a single mechanical purpose and/or online connectivity.

According to Eun, people are increasingly finding happiness in experiences rather than status objects, and the next phase of technology will try to bring outside experiences into your home. Our appliances are going to become our personal trainers, health care monitors, and security guards. We don’t know about you, but as Star Trek fans, we’re the most excited to see the holodeck become a reality.

One surprising piece of information was that the option to pay for Uber trips with cash had been requested so frequently that it had been allowed, and now 40% of users pay their trips with cash.

Gupta also said that they will be experimenting with flying cars next year.

The VP and Head Scientist for Amazon Alexa, Rohit Prasad, talked about the democratization of conversational AI. Their goal is to deliver new experiences and connect users to different services more seamlessly.

With Alexa Voice Service API and Alexa Skills Kit, developers are free to create their own “skills” for the smart speaker. At Qvik, we’ve developed some functionalities for Alexa with our customer YLE. Some of the upcoming features for the smart speaker will promote transparency with features that let you ask Alexa to repeat what you just said and delete your recordings.

Why 5G will change everything

Jonathan Weber, Global Industry editor for Technology at Reuters, interviewed Marcus Weldon, Corporate CTO and President of Nokia Bell Labs about the changes 5G will bring to tech and society, and when it should be available. According to Weldon, one big step in reaching the lowest possible latency would be storing data in local clouds to minimize data transfer times.

The development has been faster than expected, and Weldon believes that 5G could be mainstream in 3–4 years. 5G could help build smart cities where, for example, traffic lights could be optimized according to traffic volumes at different times of the day or in special situations.

Scott Solomon, Evolutionary Biologist from Rice University in Houston held a great talk about the physical changes humans would go through when living on Mars. Solomon explained how radiation and low gravity would affect the human body and what qualities would help people survive the harsh conditions on Mars.

Separate human populations on Earth and Mars would eventually create an entirely new human species. This was a genuinely interesting talk that Elisa went to see by accident, but it ended up being her favorite of the whole event.

If you go next year, here are some useful facts: 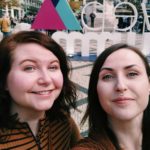 Elisa and Katri are charming and fun-loving developers and true gems in Qvik's culture.