One of the most comprehensive sources when it comes to mobile application utilization is the annual AppAnnie mobile report. Its 2018 version was released in January and is worth reading for anyone who wants to understand how digital business is shaping.

That’s because it is evident that people spend increasingly more time and money on mobile devices, with apps and services. The full report runs 160 pages, but you can save your energy and enjoy this digest instead!

Looking back to what happened last year, we can say that the people around world are generally ever more enslaved by mobile services. Despite many visibly protesting against Facebook or other social media platforms, usage around the world is steadily growing.

In two years, time spent with mobile devices has increased 50%! Subscription services are one source for this growth. 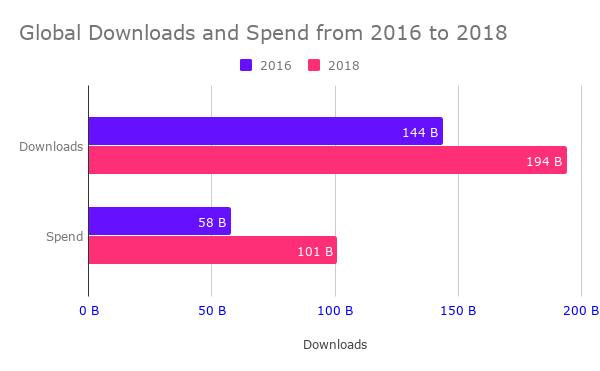 Figure: Global downloads and spend in apps for 2016 and 2018 according to AppAnnie.

In two years, app downloads have increased 35%, but the amount of money spent in apps has  gone up 74%!

Mobile-focused companies generally do very well. US tech IPOs of 2018 witnessed 95% valuation attributed to companies that have mobile service in the core.

For businesses, it is interesting to know that although mature mobile markets, such as North America or urban, industrialized Asian locations, are slowing in terms of app installations, spending money for and inside apps is still growing. In many countries, mobile revenues grow much faster than economy in general.

One source of revenue comes from growing e-commerce through shopping apps. The time spent with apps directly relates to increased digital sales.

Where does all that time spent on mobile devices go into? It depends on how old you are.

Most popular games have excellent retention. Candy Crush, Pokemon GO and  Clash Royale remain among the top 5 from year to year. 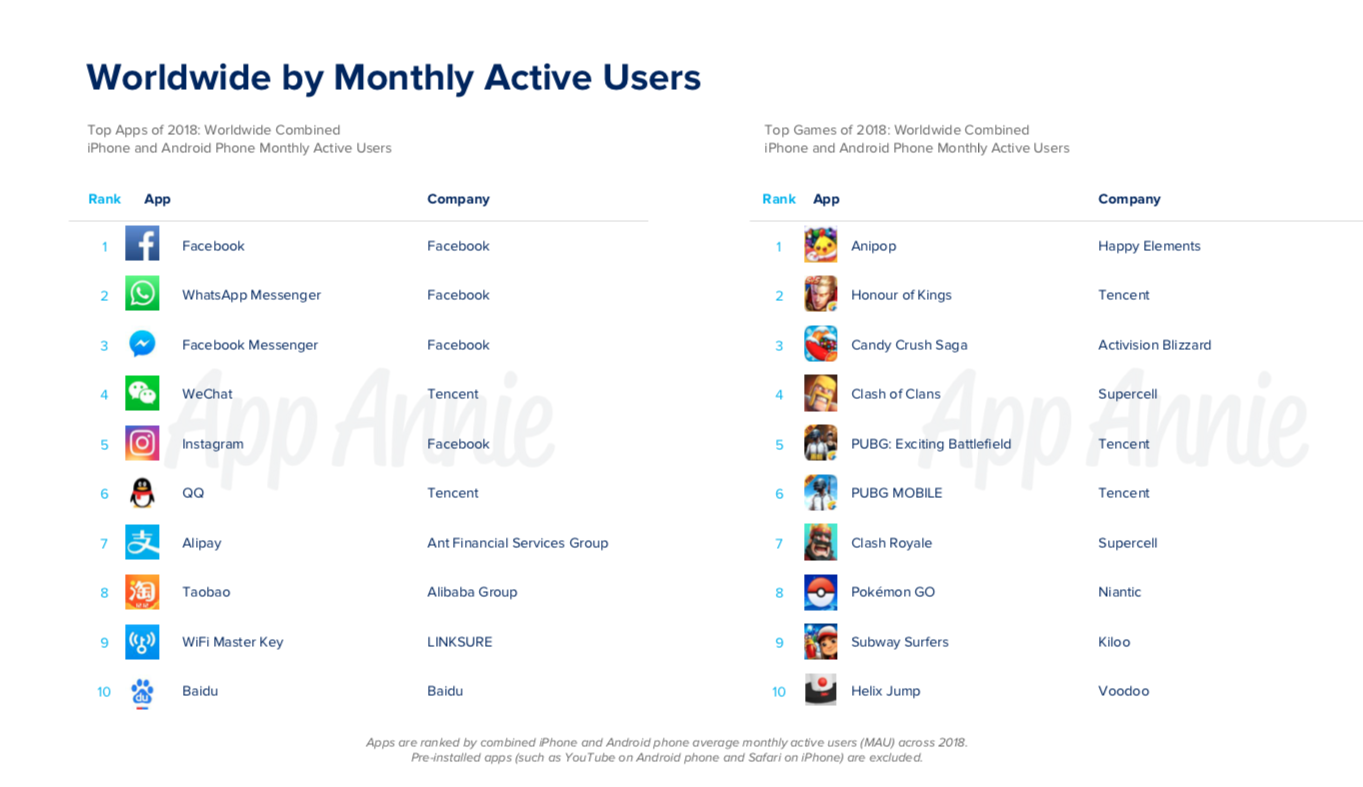 I labelled under “instant convenience” shopping and food delivery services that were globally thriving in 2018. In UK, usage of “food and drinks” up grew almost 200% in two years. Most notably in India interest in food delivery apps doubled in just a year.

Online dating apps spearheaded by Tinder are surprisingly popular. Still in 2018, Tinder was globally only next to Netflix in terms of subscribers.

Another domain that is finally reaching a competitive level of mobile UX is financial technology. For instance, in Japan, a new mobile payment service PayPay by Yahoo!

Japan has in just six months received a user base of four million. Here a radical jump globally is still probably on the way as digital banking may yet become the first and only way of banking for underserved populations in the developing world. 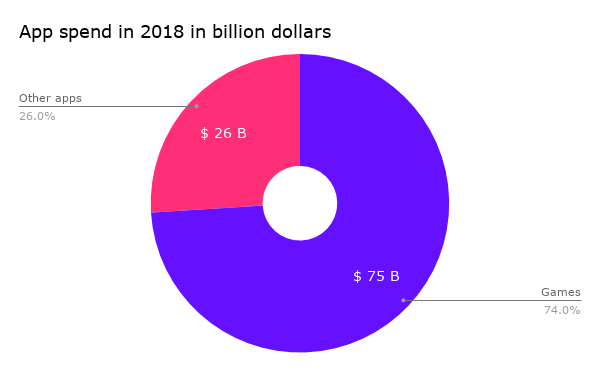 Figure: Global spend in gaming and other apps  2018 according to AppAnnie. Chart by author. 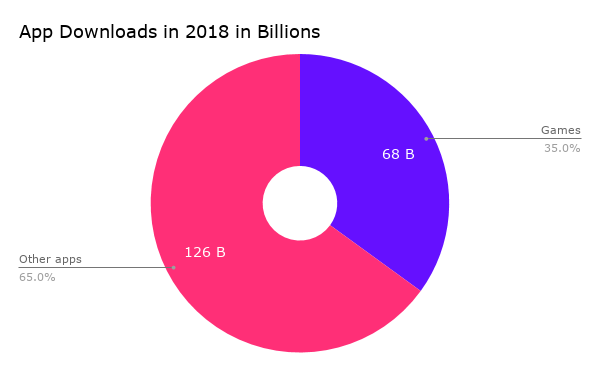 Figure: Global downloads in gaming and other apps in 2018 according to AppAnnie. Chart by author.

Finland is the haven of European mobile gaming monetization

Internet economy is characterized by big risks and enormous returns. Finland has been able to produce a stream of successful mobile games for ten years. This started in 2009 with Angry Birds by Rovio and is now continued by Supercell’s Clash of Clans and Clash Royale. 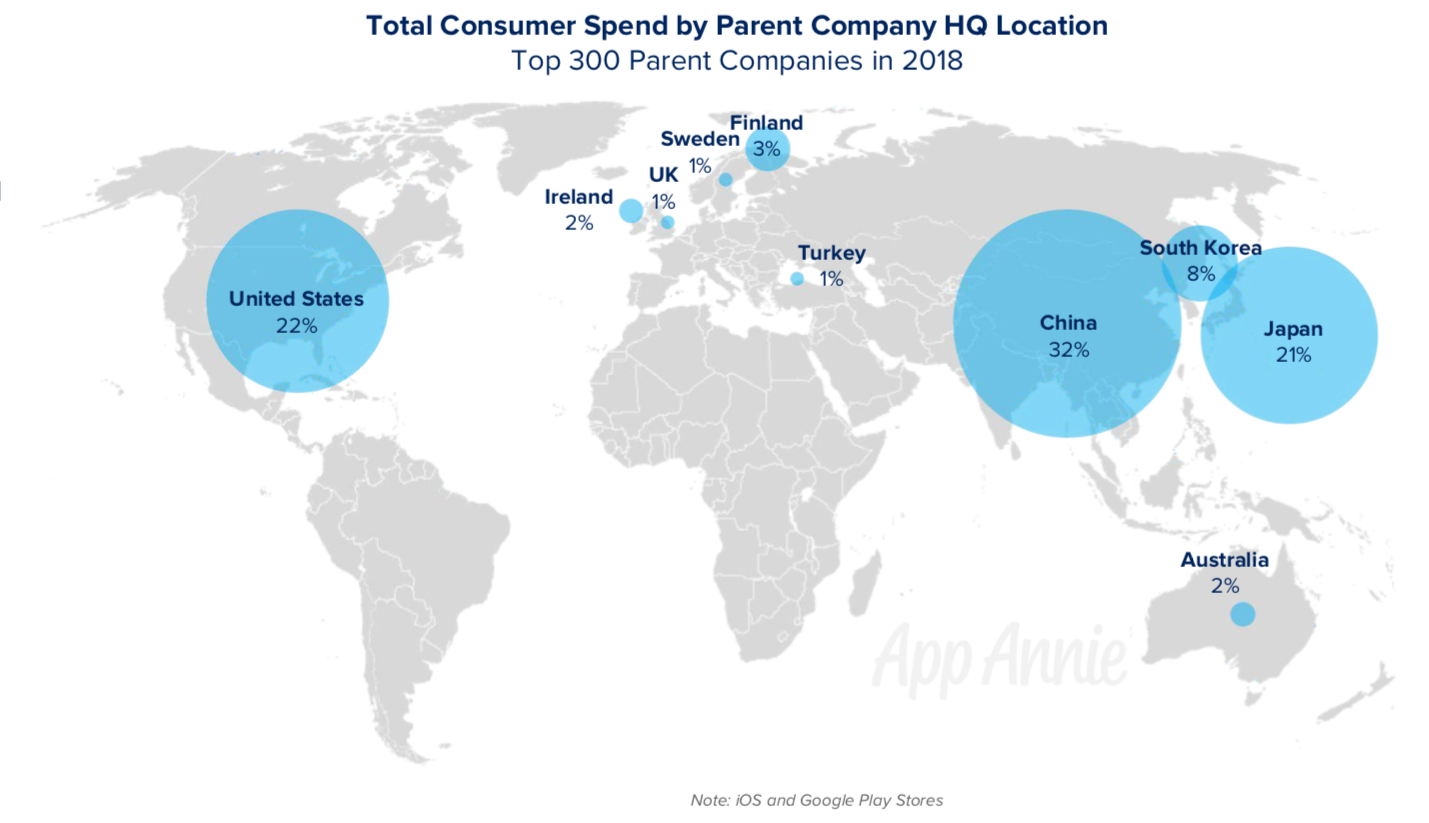 It is amazing how big of a dent a single company can do in the world app economy. Although not explicated in AppAnnie’s report, the fact that Finland shines on the global map on top of all European countries when measured in total consumer spend, should be attributable to Supercell’s prolonged success. Both of their top games also appear among the TOP10 list for global gaming app spend. Hit games are literally worth billions of dollars a year!

That said, Finnish gaming industry is the sole bright spot on the global landscape for Europe (n.b. Spotify,  headquartered in Sweden, with a turnover of around $5bn for 2018 is not visible in these stats because they bypass app store subscriptions. King.com gaming company moved from Sweden to Malta) .

Chinese, US and Japanese companies collect 75% of the global revenues. This does not predict a favorable development in terms of money siphoned from European consumers’ pockets to East and West. 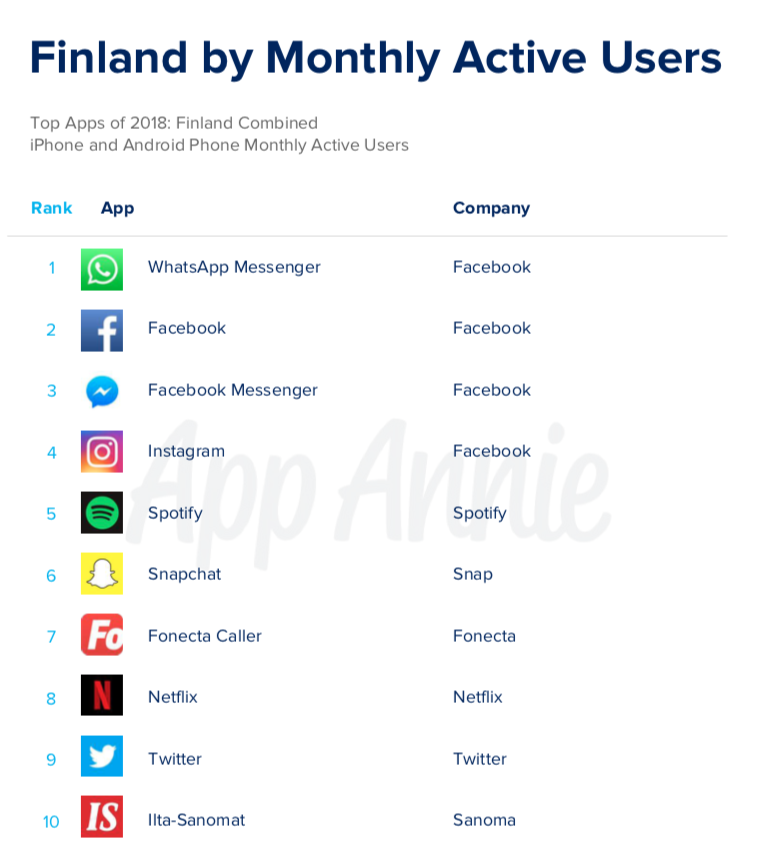 Most popular mobile apps in Finland in 2018 according to AppAnnie. (C) AppAnnie, 2019

Inside Finland, the domestic goods don’t enjoy any special attention. Supercell games are among the high spend Top10, but not the very top.

Finnish domestic market has few domestic non-gaming app brands that make it to Top10 for monthly active users and downloads, but for the most part, Finnish consume the same social media and streaming media services all the other Westerners do.

In 2019, the growth of mobile usage seems inevitable. More time will be spent with devices and video is going mesmerize mobile consumers more than ever. Globally, Disney+ is expected to cram into the media space with the help of Disney’s popular brands.

The gaming world holds high expectations towards the upcoming Harry Potter game from Niantic. This franchise game is anticipated to break the records set by Niantic’s Pokemon GO.

Supercell released its latest game Brawl Stars in December 2018 with great reception. This games is apparently establishing itself as  a new money maker by entering Top10 revenue list in a record time for the company. However, year to year changes are slow and you can count that most of Top10 apps will continue to fare well still in 2019.

That’s the top of what you need to know. There are of lot of more insights to be found in the full report, including country specific app download and spend reports for more than 25 countries.

Beautifully illustrated by Aija Malmioja of Qvik. Charts by the author.

Over a third of online shoppers are now more interested in digital loyalty. How to keep the customers you’re gaining?