Treating your company’s digitalization as a project? That’s why you’re failing.

Successful digitalization is a process, not a project.

Because of this, effective digitalization cannot be achieved with a one-off project. You need to draw up a digitalization roadmap with purposeful steps. The digitalization effects have to span multiple projects and become an integral, continuous development process in your company. In this article, I discuss three levels of digitalization that can be used to guide the process towards success. This will provide maximum benefits for the customer and improve your brand’s competitiveness .

Digitalization or digitization refers to the creation of digital interfaces for services that have been traditionally handled through physical interactions or face-to-face communication. For instance, you could pay for parking with a mobile app or use a website to order pizza instead of calling the restaurant.

Digitalization as such is definitely nothing new. The birth of the internet was a huge step in the digitalization of communications and media, for instance. But the process has been far from uniform, and some business sectors still remain novices to digitalization (McKinsey, 2018).

In the business of creating new digital services, many well-established companies notice that digitalization is never a one-off project – partially because they fail to set the right goals, partially because more ambitious targets are difficult to reach and envision.

Companies that have just started their digitalization process would do well to clarify and define their targets in relation to three levels of digitalization: simple, adaptive, and transformative. Next, I will explain their differences.

Evolution of the customer journey from physical to the different variations digital services.

Simple digitalization solutions are built to be highly compatible with pre-digital processes. Everything is done as before, following existing processes, expect that some) of the intermediary steps are digital.

I will illustrate this with an example of an ice cream stand. The simple digitalization solution for the ice cream vendor might be (pre)ordering chocolate cones via Whatsapp, web, or even SMS. This helps the salesperson  keep track of orders and improves their accountability.

Unfortunately, simple digitalization cases provide limited added value to consumers and may feel inadequate in 2020. The worst example of simple digitalization was the introduction of “digital” forms in which papers were replaced by equivalent PDF files that often had to be printed out for signing and scanned again for digital submission. In this case, digitalization  didn’t really make things that much easier for the consumer.

But at its best, even simple digitalization can dramatically improve data handling and increase the process throughput at the receiving end, for instance in processing tax returns.

On the other hand, simple digitalization can be innovative and enough to cultivate new business if done thoroughly and properly in the right business environment. In Finland, the digital real estate agency Blok has succeeded in a short time in grabbing a major market share by making the process of property sales quicker, easier, and cheaper for both sellers and buyers (see Olli Gunst of Blok demonstrate their concept in a recently recorded talk).

The customer value of digitalization increases with adaptive digitalization in which the constraints of the legacy process are relaxed. This sounds easy and desirable but can be very hard to pull off.  The mechanisms that served the old way of doing business can seem written in stone: they may have associated hardware (large investments) and full business units of people dedicated to doing one manual part of the process. When you decide to bypass these, it will mean phasing out a lot of old infrastructure. This could mean  axing customer service jobs in brick-and-mortar service points in favor of self-service options.

In the case of our ice cream parlor, adaptive digitalization would call for streamlined service. Getting your favorite flavor ordered and ready to pick up at the booth without queueing, handing out bills, or interacting much with the attendant. 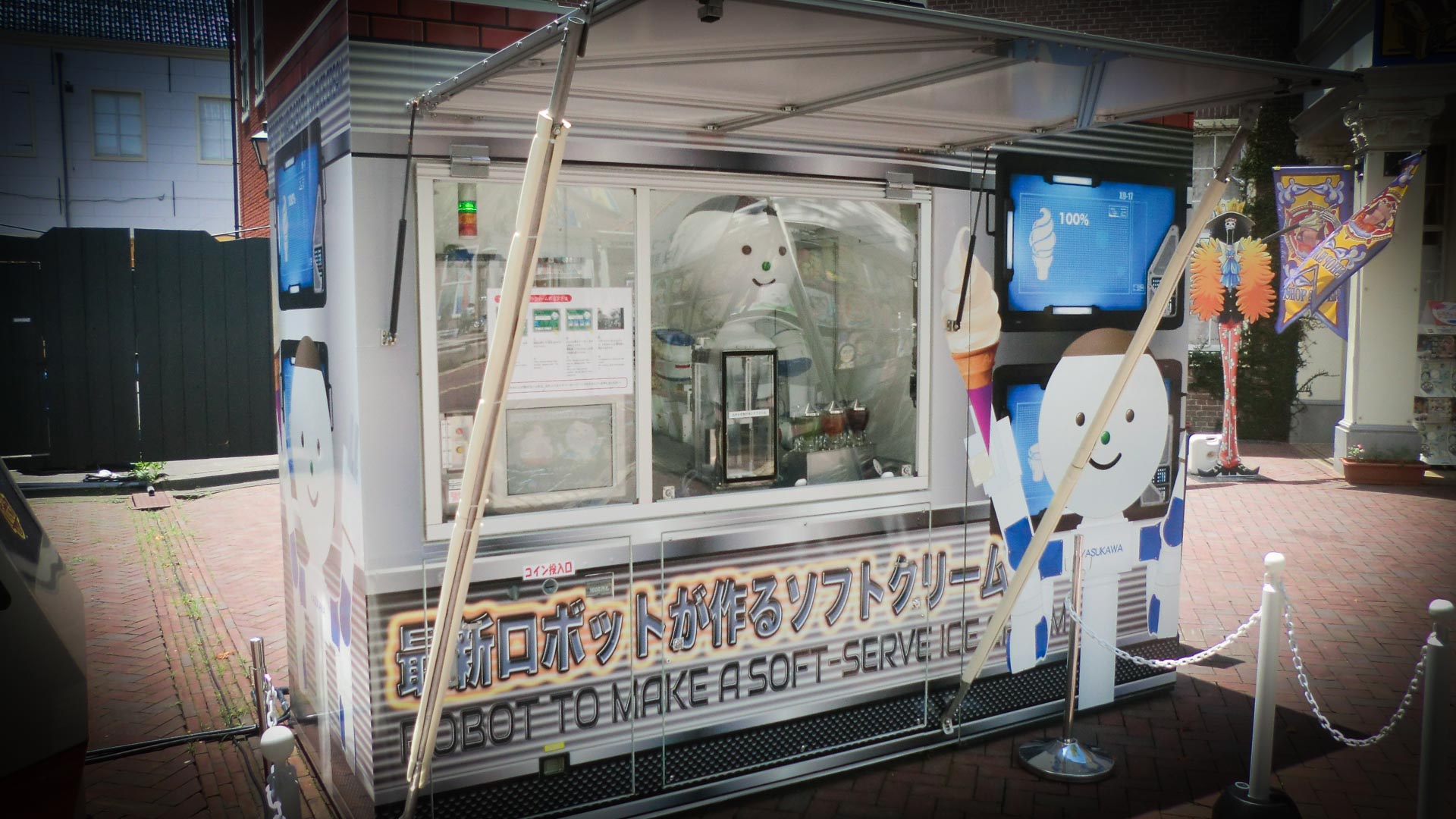 The idea of automated ice cream vending was realized already in 2009 by this Japanese kiosk.

The development does not stop there. The third level is why people so eagerly trumpet the virtues of digitalization and the new world order created by digital platform services. It is clearly the ultimate destination in which every future-oriented company should be heading.

The thing is, that while “digitally native” companies may do well to aim straight for this level, it is quite a leap from the traditional way of conducting business for companies that were not born into the internet (like a mom-and-pop ice cream stand). In transformative digitalization, the same outcome (e.g. receiving a gelato portion) is carried out in a different way, bypassing many points of the old establishment both in hardware, politics, and business.

For instance, Uber offers conventional physical transportation from A to B, but the payments, operators, and interfaces are all different from traditional taxi companies (or at least they were, before incumbents started catching up in the digital game). For vehicles, Uber still relies on human-operated vehicles of various sorts, something in which the alternatives, such as self-driving cars, have not yet turned out to be viable.

Our ice cream shop could potentially become fully automated, having a robot to scoop up the cones according to orders received from an app. The orders could be prepared in mobile “truck” units and delivered with drones over short distances, providing a fresh ice-cream-as-a-service service plan.

What are you aiming for?

The take-home message is that your digital transformation process needs a roadmap that can realistically deal with the necessary steps on the way. If your company has just started the journey, it may seem impossible to imagine what transformative digitalization might bring.

However, it is crucial to look ahead and make investments that can still support your business in 5+ years, even though their capital costs weigh in immediately. The final ice cream retail chain example: when replacing its ice cream machines, the company looks for vendors whose hardware provides IoT functionality and flexible reprogrammability so the future vision of full self-service can be achieved.

This article has argued that a good digital strategy should prepare the company to climb the ladders with appropriate foresight. Consider what short and long term advantages your investments will bring at each stage and how they will fulfill the ultimate digitalization scenario — as far as we can imagine it today.

Where Does Your Loyalty Lie in the Game of Consultancy?